Blog - Latest News
You are here: Home1 / Articles2 / Unifying the Definitions of Yoga 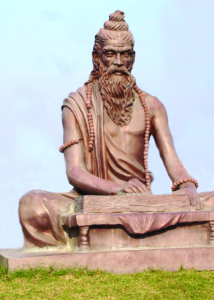 The meaning of Yoga is not found in a single definition but through several interrelated definitions that come together to form a vision of Yoga beyond words and concepts. Together, these definitions form a mandala, a circle of understanding that both encompasses and transcends all of the various shades of Yoga’s meaning, guiding us to its essence – the truth of our own Being which is simultaneously the truth of all things, which words can point to, but never express completely.

The Sanskrit root of the word Yoga is yuj, meaning “to join or unite”. There are many cognates for the word Yoga in Indo-European languages including the English “yoke”, to join two things together, and the Portuguese “conjugar”, to join or unite. The concept of Yoga as union encompasses a broad range of meanings, each of which contributes to the understanding of Yoga as a whole. The ultimate meaning of Yoga as union is the joining of the individual soul, Atman, with the Universal Self, Brahman, which is the recognition that the ultimate purpose of each individual’s life journey is to unite with their true Being which is simultaneously the Universal Self and Source at the heart of all things.

We begin this journey of union at the most palpable level – union with our own body. Although we relate to the body as “I” and “me”, our relationship often lacks any real depth or intimacy. In fact, our body is often treated as a slightly foreign object, used by the everyday personality in its quest for survival, reproduction and social hierarchy. Through Yoga in general, and through the techniques of Hatha Yoga in particular, we unite with our body deeply, optimizing its functioning, thereby transforming it into an appropriate vehicle for the journey of union with our true Being.

This union with the body serves as a foundation for uniting with our own breath through pranayama, the science of yogic breathing. As we develop mastery of the breath, we balance the nervous system, reducing stress and cultivating the equanimity that serves as a foundation for our journey of union with our true Being. Union with our breath naturally awakens awareness of our body of subtle energy, an expansive dimension of being that allows us to transcend our everyday thoughts, feelings and beliefs, thereby loosening our rigid identification with the personality.

Uniting with our breath and body of subtle energy cultivates spaciousness within our psycho- emotional being that allows us to explore it with greater openness and objectivity. Ultimately, we will come to see that our everyday mind, called manas, is not our true identity, but the first step in working with limiting patterns of thought, feeling and belief is to unite with them more deeply through awareness of the tendencies that cause confusion and suffering. Through this greater intimacy with our psycho-emotional being, we come to see that the personality is actually a composite of layers of conditioning in the form of evolutionary survival instincts, culture, society and family completely distinct from our true Being.

This gradual recognition of the limiting nature of the conditioned personality naturally awakens our higher mind, called buddhi, that witnesses limiting thoughts, feelings and beliefs while neither repressing, reacting unconsciously or identifying with them as “I” and “me”. As we unite with this higher mind more completely, witnessing becomes natural and spontaneous, gradually releasing tendencies toward negativity, hostility and feelings of  defectiveness and insufficiency. This union with our higher mind through conscious witnessing is especially critical when we experience loss, pain and suffering, for behind every experience of limitation, there always lies the possibility of seeing the limiting beliefs that are the cause of psycho-emotional pain and suffering.

Through awareness and release of limiting thoughts, feelings and beliefs, space is created for understanding the meaning of Yoga as union in the ultimate sense of union with our true Being.  This union is not something we create or achieve, but is simply seeing clearly when all misperceptions, limiting beliefs, confusion and conditioning have been released. This true Self is pure conscious Being, inherently complete, the Universal Self at the heart of all things whose very essence is unity.

The nature of this Universal Self and the means to unite with it are clarified by other definitions of Yoga found in the Bhagavad Gita. The first of these is in Bhagavad Gita 2.50:

Skill in action is essentially the ability to see clearly who we are not, the conditioned personality, and who we are, limitless true Being. This skill is expressed moment to moment in daily living through conscious witnessing, observing psycho-emotional patterns and tendencies while neither repressing, reacting unconsciously or identifying with them as “I” and “me”. Skillful action is also respect for our own conditioned patterns and tendencies by recognizing that they are deeply entrenched and therefore not released quickly and easily. Working with these patterns skillfully requires timing, patience and compassion for self and others, for confronting limiting beliefs too forcefully can actually empower them or send them deeper into hiding. Skillful action therefore encompasses acceptance and respect for our own history, recognizing that every step, no matter how painful, has been part of our journey of awakening. Skill in action is also integrating positive qualities such as love, compassion and generosity into daily living, so that whenever negativity arises, we do the exact opposite of our initial tendency which might be reactivity, defensiveness or hostility. This skillful action in daily living allows us to see with absolute clarity that fulfillment and meaning will never be found at the level of the personality but only through union with our true Being.

Skill in action naturally leads to equanimity, which is highlighted in the next definition of Yoga, from the Bhagavad Gita 2.48.

Through union with our own body, breath and mind, and our ability to act skillfully, there is a natural increase in psycho-emotional stability along with a reduction in confusion, stress and anxiety which allows us to live with greater equanimity. The essence of equanimity is the ability to encounter challenges, issues and problems as opportunities for transformation and awakening rather than as emergencies that need to be resolved by changing people or things in our surroundings. This change in attitude is key to union with our true Being, for as long as we see life’s meaning in success and achievement, we will be forever trying to fix and improve our surroundings, searching and struggling while never seeing that we are the problem and also the solution we seek. This 180º change in attitude allows us to see every interaction and activity as an opportunity for greater recognition of our true Being by not reacting, and instead stepping back to see the tendencies and conditioning that cause the same “problems” in different disguises to occur repeatedly. Equanimity begins as a practice requiring constant remembering, but, as the conditioning that causes suffering is gradually released, we experience equanimity continually as a natural reflection of union with our true Being.

The Yoga Sutras of Patanjali, 2.3, broadens our understanding by focusing on Yoga as a means for uniting with the stillness which is the essence of our true Being.

Union with our body, breath and mind together with growing skill in action and enhanced equanimity naturally lead to a stilling of the mind. Yoga practice cultivates stillness by reducing the confusion, distraction and conditioning that keeps us from seeing the essential silence and peace of our true Being that is always present and waiting. The Yoga Sutras of Patanjali present a multifaceted methodology for bringing the mind into stillness by releasing limiting conditioning at all levels of being. The Yamas, the ethical precepts, reduce inner and outer conflict. The Niyamas, spiritual observances, provide a road map for the journey awakening. Asana, the Yoga postures, remove stress and tension from the body while optimizing its functioning. Pranayama cultivates calm and tranquility while awakening us to our body of subtle energy. Pratyahara draws the senses inward, reducing distractions from our surroundings. Dharana, concentration, cultivates psycho-emotional stability and Dhyana, meditation, allows us to experience the wholeness, integration and peace which are reflections of our true Being.

Each of the limbs of Yoga, when practiced diligently and sincerely, prepares us for complete stillness of the mind which is experienced in samādhi, the essence of Yoga practice from the perspective of the Yoga Sutras of Patanjali.

Samādhi is deep meditative absorption in which we focus exclusively on the object of our meditation and also merge with that object completely, so that the meditator and object of meditation unite as a single entity. There are various levels of samādhi, and as we deepen our practice, our object of meditation becomes increasingly more subtle until it is transcended completely and we experience only pure conscious Being, beyond the realm of thought, concept, theory or belief. In this deepest level of absorption, all movements of the mind, whether positive or negative, naturally come into stillness, which is not void in any sense but is infused with truth, meaning, wholeness and peace that absorbs us so completely that it becomes our sole reality. At this level of samādhi all of our definitions of Yoga merge to form a Mandala of union with our own true Being which is simultaneously the Universal truth at the heart of all things. This experience gradually infuses every activity and every moment of living with the essence of truth that is our life’s purpose and destiny.

Pranayama for Healing and Transformation
Scroll to top